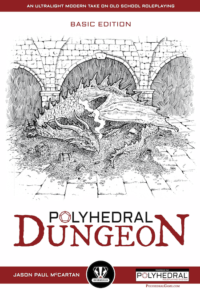 The launch of any new game system and games based on it always makes the creator(s) and publisher wonder if people will buy it, buy into it, and also play. With the success so far of POLYHEDRAL DUNGEON, InfiniBadger Press is planning to continue to release additional expansion products for it, including:

At least two additional named genre games and expansions are going to be released, for the modern supernatural and space science fiction arena: POLYHEDRAL SHADOWS and POLYHEDRAL GALAXY. New genre rules from each of the games can allow cross-genre play. Each of these games also has an Expansion book that provides additional creatures for use with them that are also cross-compatible with the other games. These will be THE BOOK OF CRYPTIDS and THE BOOK OF ALIENS. Starting later in the year specific setting and campaign books that support POLYHEDRAL ROLEPLAYING SYSTEM games will be published. All of these products will see support at the POLYHEDRAL SYSTEM HUB, a central website that will post updates and resources for all POLYHEDRAL ROLEPLAYING SYSTEM products, including details on the upcoming licensing options that will allow others to create non-commercial and commercial products using thePOLYHEDRAL ROLEPLAYING SYSTEM and products created for it by InfiniBadger Press and others.

The Print on Demand version will be available soon, and anyone who buys the digital version will receive a discount against that, as it is a Digital+ product.